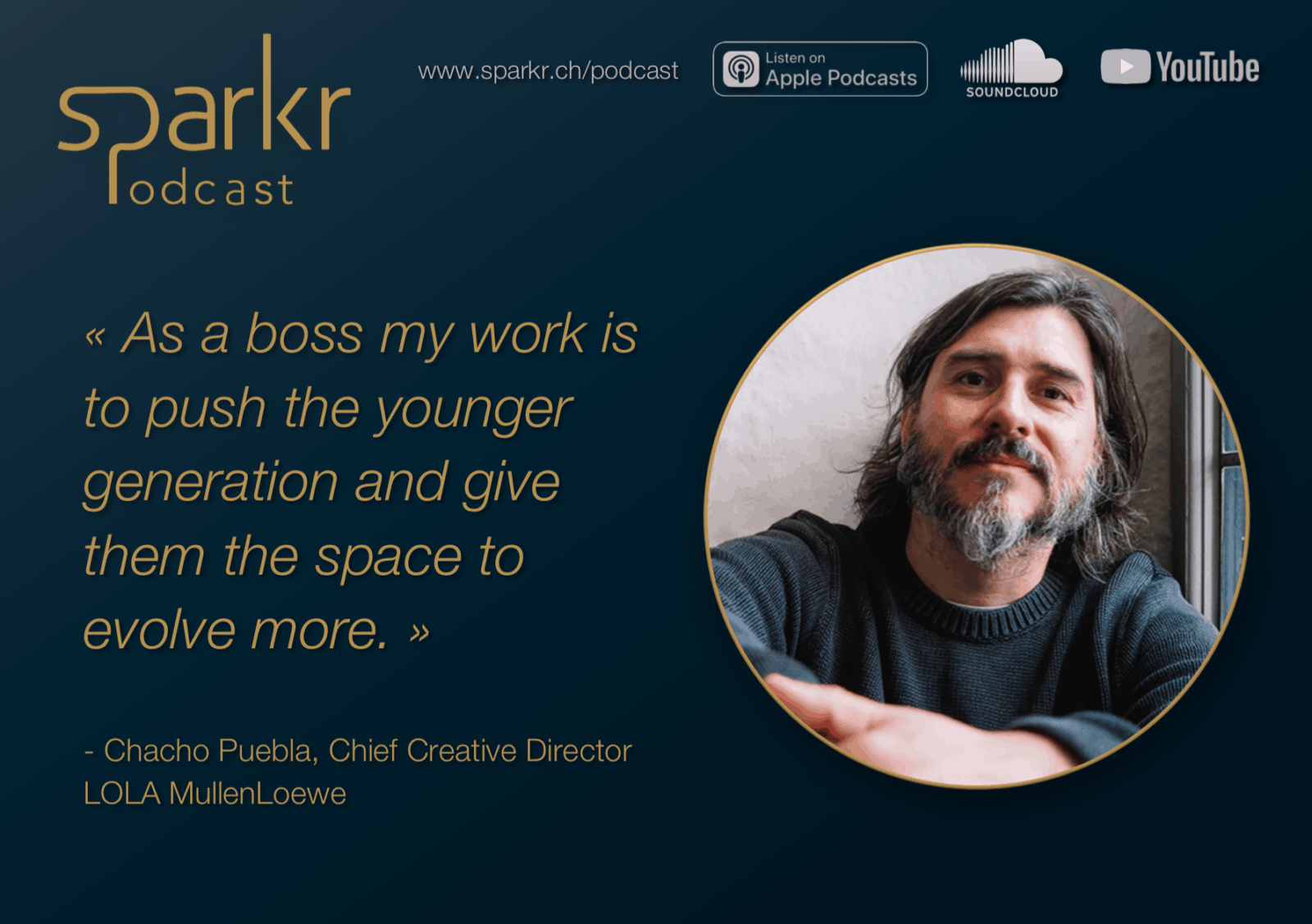 Learning and perfecting how to build a creative team was a critical success factor for Horacio „Chacho“ Puebla. “Having ideas is the best thing humans do”, says Chacho who is the Chief Creative Director of LOLA – a creative and strategically driven advertising agency with a Latin spirit and global reach. Their clients include top brands such as Burger King, Magnum, Rexona and new kids on the block like 9Gag. As a part of the MullenLoewe agency network LOLA has been winning dozens of awards for their creative work all over the world. Most notably, over the last couple of years, they have been awarded so many Lions from the festival in Cannes that you could repopulate the North of Africa with these noble wild cats.

Chacho is a creative pro who knows how to build a creative team and it was a great pleasure to sit down with him and chat about creativity and most importantly, how to hire, build and enable creative teams to generate and execute on new ideas every day. Learning what it takes to establish a creative power house is crucial in today’s world and the future where new ideas and concepts need to be thought off at an ever-faster pace.

Therefore, I am especially thrilled to bring to you this episode of the Sparkr Podcast where it is my goal to uncover mindsets and tactics of people who are great at what they do and make their experience applicable for everybody. Let’s dive right in and talk about creativity.

With Creativity You Never Get Stuck

Creativity comes in many shapes and forms. For Chacho, creativity is about mixing ideas from all sorts of places and disciplines to solve problems in a contextually aware fashion. It’s about finding and creating new patterns. It’s structured chaos – walking a fine line between hard, disciplined work and craftsmanship as well as serendipity, openness and chaos. Imagine a world class chef who’s gathering influences from all over the world for creating new recipes and outstanding meals at a top restaurant who will also cook his kids’ favorite spaghetti bolognese on his day off with the family. This world class chef is aware of the context he’s operating in, cooking highly sophisticated meals for the gourmets while understanding that his fusion kitchen masterpieces won’t be fun for his kids at home.

And since creativity is about evolving and getting better in different disciplines, creativity is like mastering a pentathlon where you need to excel at doing different things rather than only running a marathon.

With a mindset open to creative solutions, you and your team will never get stuck. But how do you foster a creative culture in your team and organization?

How to Build a Creative Team

“It’s a lot of pressure to be creative every day and to bear that pressure alone is really hard”, says Chacho and he adds that “with a team it’s much better because one person can be down while another will be up.” Therefore it was critical for Chacho to learn how to build a creative team around him time and time again.

A team is a supporting structure that can work magic and can result in continuous creativity if you let it. And without it you are screwed. For people to come together as a creative team and perform every day, you need to lead by values and you need to give space and freedom while demanding from everyone to take responsibility. “If I hire somebody and I don’t give him freedom and support, why did I hire him?”, Chacho adds with his signature laughter – which is one of the many reasons why you should listen to the whole conversation of this Sparkr Podcast (right on this page, on Soundcloud or Apple Podcast).

Chacho continues that “as a boss, my work is to create the space and atmosphere where our teams shine” and “the more diverse and trustful the team the better”, he is convinced.

You might ask what values LOLA lives and works by and how they hire their people to join these kinds of teams. That’s up next.

“You need to hire people that are better than you because they will also improve yourself”, Chacho told me during our conversation. That might sound like LOLA only hires the most talented people but it turns out that talent is not the most important factor for Chacho and LOLA. The most important thing they look for is the attitude of the people and if these people share the values of LOLA. In consequence, LOLA “hires slow and fires fast”, says Chacho.

Checking for the attitude of people, one of the questions Chacho likes to ask in a job interview is this: “What was the most unorthodox thing you did, and it worked?” Chacho explains that “lots of people never were unorthodox in their lives and always follow the rules. Those people are not the people I need because they will get stuck when the rules are not there. I want people who can move and who are open”. And there it is: One of the core values of LOLA is openness.

LOLA is not living by hierarchies or bureaucracy. That’s why the core principles and values of LOLA were co-created by all the people working at LOLA at the time. It turned out that the LOLA family sees itself as a group of people who are open, who value and deliver great craftsmanship, who have a solver attitude and who stay hungry. It’s these four values that LOLA uses to find out if a new person is the right fit for the company because “rather than having a common interest about an activity like advertisement, having common values is more important. Values are more important than activities”, Chacho explains.

I would argue that leading and hiring by values contributed significantly to the fact that the creative agency LOLA has been rated among the best places to work in Spain for the last couple of years.

To understand in detail what Chacho and LOLA mean by those four values and what role they play in how to build a creative team, it’s best to listen to the whole conversation I was having with him for this episode of the Sparkr Podcast. In this episode Chacho gives examples and we also talk about much more than what I’ve just covered in this article. And first and foremost, you’ll experience the uplifting, dynamic spirit of Chacho first hand in what has been my most fun and lively Sparkr Podcast episode to date.

6 Gedanken zu “SPARKR PODCAST #8: How to Build a Creative Team”