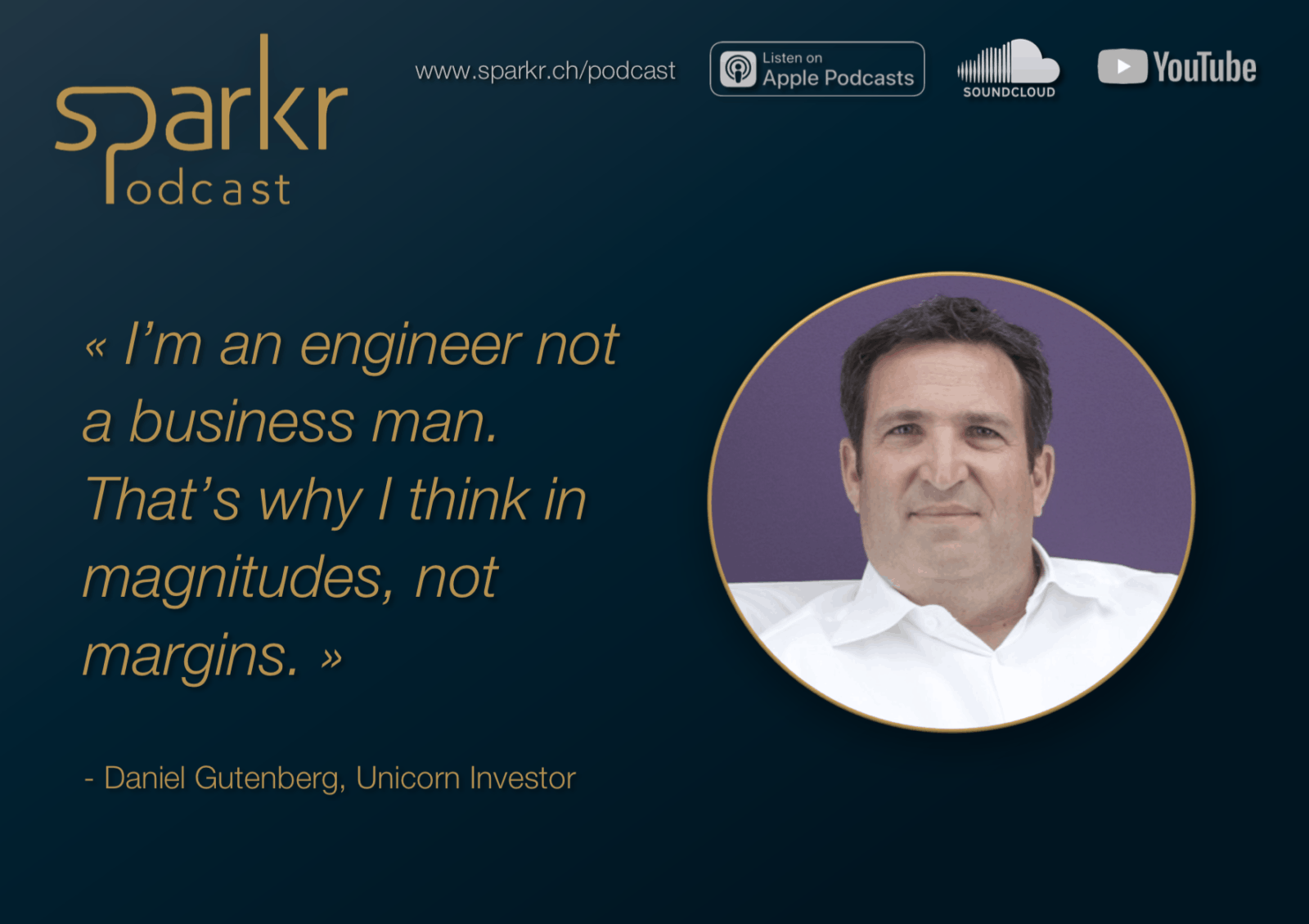 Daniel Gutenberg has an amazing track record as a business angel and investor. He invested early in Facebook or super-hot start-ups like Israel's Mobileye which got acquired by Intel for over $ 15bn earlier this year. Daniel can say with confidence that he is specialized in unicorns since he has more than 10 of them in his portfolio.

In this episode of the Sparkr Podcast we talk about how Daniel assesses risks and opportunities, the mindset of a contrarian, what investing has to do with surfing (Daniel was a surf instructor in Hawaii), what's the future of education and much, much more.

“Delivering the Shovels for the Gold Rush”

Before becoming a business angel, Daniel was an entrepreneur and became successful as a one-stop-shop for all the tools internet entrepreneurs needed to take off. He says he was at the right place at the right time writing a letter to a then small company called Netscape Communications which provided one of the first internet browsers Netscape and asked to be their distributor in Switzerland and Europe. With this partnership Daniel and his company became the main distributor of the shovels needed during the first internet gold rush.

Just before the big dotcom crash Daniel sold his company and decided to become a VC and then business angel. It turns out, this instance was not the only time Daniel benefited of lucky coincidences. Also in the case of one of Israel’s top start-ups called Mobileye, Daniel invested early and won big when Intel acquired the company in early 2017 for over $ 15bn. Listen to the podcast episode to hear the amazing story how Daniel got to know the founders of Mobileye by complete coincidence.

So, is Daniel just a lucky guy? Not at all. He has the right mindset to back up his luck. Daniel puts it this way with help of a quote by Tiger Woods who said “the more I train, the luckier I get”. And Daniel trains a lot: He reads tons of blogs, business plans, meets many bright minds and remains open for opportunities to cross his way at any time in any place.

He thinks in terms of magnitudes, not margins. If something seems impossible that is fine with him as long as, if it works, it will be 100 times better than the competition. As the polarizing Silicon Valley icon Peter Thiel would say: “Competition is for losers.” (I recommend you read his book ‘Zero to One’)

Daniel doesn’t take risks hidden in business models or regulatory decisions but in the capability of the teams and technologies he invests in. In the case of Mobileye Daniel realized that their technology is capable of giving cars the ability to see their surroundings for way cheaper than other technologies out there. Even tough, he couldn’t be sure if Mobileye will succeed, Daniel knew that if they would be able to pull it off and realize their vision, they would be far superior to any other technology out there.

Think for Yourself, Work with First Principles

Daniel thinks for himself and is not distracted by mainstream opinions: When you look at many autonomous vehicles from very powerful companies, you’ll see that they are packed with huge and expensive sensors that cost tens of thousands of dollars and therewith making autonomous vehicles with that technology unaffordable. This is very different from what Mobileye is able to provide today.

That shows, Daniel was confident enough to bet against the assessment of companies like Google or Uber. In addition, at the time of Daniel's investment, the available processing power was not yet capable of enabling the real-time calculations of Mobileye’s technology. But Daniel knew that chances were high that processing power will increase and one day reach the point where Mobileye’s technology can take off – and it did. Today, Mobileye has 80% market share. Elon Musk would call Daniel’s mindset “reasoning from first principles”.

For Daniel being able to pull that off he reads a lot of blogs like TechCrunch, opinion pieces by Peter Diamandis or Ray Kurzweil, he curates his Facebook and Twitter feed to show opinion leaders for example in the space of blockchain etc. He makes sure that information – be it news in tech or business deals – can flow towards him.

From the hundreds of business deals that find their way into Daniel's inbox he narrows it down to 5 deals per year max. How does he do that? Let me highlight four of numerous factors Daniel looks at when assessing a proposal.

First, Daniel looks at the mindset of the founders, especially how ambitious and passionate they are and if they actually want to solve an issue and make the world a better place or if they just want to have a business card with ‘Founder and CEO’ on it.

Second, if he doesn’t understand the business case within 30 seconds, he won’t invest. If he as a well-informed investor is not able to get it in 30 seconds why would a client or business partner get it? And if it is hard to convey the value of your business, you’ll be having a difficult time.

Third, Daniel kicks out any business plan that is full of grammatical errors for example because that indicates that the start-up is not giving their best.

Forth, even though Daniel is topic agnostic he likes to surf a hot-topic-wave like AI because that makes life easier for the start-up to find talent and partners, it raises awareness etc.

When talking about waves, Daniel knows what he’s talking about since he spent a couple of years as a surf instructor in Hawaii. Like in surfing, catching and riding the right wave will always take you further. In order to catch the right waves regularly, you need to be out there in the water, get wet, try many waves and not just look at them from the safety of the beach.

Daniel is convinced that the education system is awaiting a significant wave. “Schools are totally broken” and need to be reinvented. Daniel is not alone with his opinion: the World Economic Forum says that by 2030 the largest internet company might be in the education space.

The way we teach will be “180 degrees different” says Daniel: The theory part will happen at home on a screen instead of in class at school in front of a human teacher. Today’s homework on the other hand – applying theory and solving problems – will happen at school with your peers and teachers.

But what to teach? Listen to the podcast to hear what kind of skills Daniel thinks children should acquire to be fit for the future.

And what’s the wave Switzerland could ride on and benefit from? Daniel thinks that Switzerland has a great opportunity with its ‘Crypto Valley’ and its globally known inhabitants like the Ethereum Foundation. According to Daniel, Switzerland could become the world-wide home of cryptocurrencies, ICOs etc. “Let’s make Switzerland the crypto capital of the world.” is Daniel’s call to action. And as usual with Daniel, he also takes action for example by co-hosting the first global Crypto Finance Conference in St. Moritz in January 2018 adequately timed to create synergies with the annual World Economic Forum in Davos.